RENO, Nev., March 01, 2022 (GLOBE NEWSWIRE) -- Aqua Metals, Inc. (NASDAQ: AQMS) ("Aqua Metals" or the "Company"), a leading innovator in metals recycling with its AquaRefining™ technology, has achieved a key milestone and potentially an important industry breakthrough by producing its first lithium hydroxide from lithium-ion battery black mass at the Company’s Innovation Center in the Tahoe-Reno Industrial Center. Currently, the only commercially proven recycling technology being utilized for lithium-ion batteries is smelting which does not recover the lithium. Lithium is a critical component of the lithium-ion batteries that battery manufacturers need to produce to meet the demand of the fast-growing electric vehicle (EV) and overall energy storage markets. In addition to producing lithium through a patent-pending proprietary process, the Company’s R&D program at the Innovation Center is working to recycle the other key elements of lithium-ion batteries such as cobalt (already plated), nickel, copper, and manganese.

“This is an important step in demonstrating our proprietary Li AquaRefining process, which we think is environmentally and economically superior to other metals recycling methods,” said Ben Taecker, Chief Operations and Engineering Officer of Aqua Metals. “Our goal is to produce battery precursor grade lithium hydroxide, and these early results indicate we are on track for meeting this goal. This also confirms that we remain on schedule to start running our pilot-scale unit in the coming months.”

As governments and vehicle manufacturers take steps to phase out internal combustion engine vehicles to meet carbon emissions reduction targets, demand for lithium is soaring to the point where lithium shortages are already being forecasted for the near term. Benchmark Mineral Intelligence has predicted that there will be acute deficits of lithium as early as this year. The price of lithium has also been dramatically affected, increasing by more than 300 percent in 2021. It currently stands at approximately $58,000 a metric tonne. Increased mining activity alone cannot mitigate the shortages. Mining is environmentally costly and takes five to seven years to get operational; recycling is critical to meet future demand.

“Morningstar, Inc. has predicted that lithium-ion demand will likely outstrip production within the next five years, and demand for lithium will only continue to skyrocket as the world transitions from fossil fuels to a renewable energy economy,” commented David Regan, Aqua Metal’s Vice President of Commercial. “As of today, the only commercially proven recycling technology for lithium-ion batteries is smelting, which has a negative environmental impact and does not recover the lithium or manganese. Applying the proven AquaRefining process to lithium-ion batteries has the potential to be an important industry breakthrough, as we believe it is the only truly sustainable recycling technology under development that recovers all the valuable metals and compounds without using high heat or consuming massive quantities of chemicals that create difficult to manage waste streams.”

Li AquaRefining recycles spent lithium-ion batteries in a clean, economical way by utilizing the electron as the reagent instead of chemicals or high heat. The emissions-free, room-temperature process uses about one two-hundredth of the chemicals of a standard hydro process and does not generate the carbon footprint of a high heat approach. Li AquaRefining is a closed-loop process that recycles the chemicals it uses. Consequently, it has a fraction of the waste streams, estimated at approximately 99.5 percent less than the standard hydro process.

Photos accompanying this announcement are available at

About Aqua Metals
Aqua Metals, Inc. (NASDAQ: AQMS) is reinventing metals recycling with its patented hydrometallurgical AquaRefining™ technology. The modular Aqualyzers™ cleanly generate ultra-pure metal one atom at a time, closing the sustainability loop for the rapidly growing energy storage economy. The Company’s offerings include equipment supply, services, and licensing of the AquaRefining technology to recyclers across the globe. Aqua Metals is based in McCarran, Nevada. 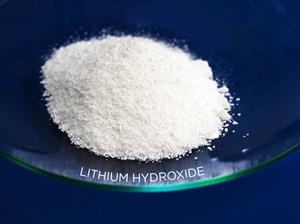 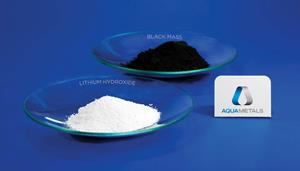